But he never married and doesn't have any children that we know of. He died two Christmas's ago.

No love lost there. Those two never did work out how to get along. Drove their mother to drink if you ask me. She was like the overly friendly grandmother that Lily wished she could replace with her own grandmother and Lily still couldn't picture her working along side Aurors like Alastor Moody and Marcus McKinnon.

She could picture her arguing politics either. She seemed the type to smile at whatever you had to say and then tell you a story. But maybe Lily only felt that way because that's what she had done with her.

That's why we had to move out here. I miss the old house sometimes, but my older sister always liked it more than I did. Left it to her husband's nephew in her will though. Never did understand the way she thinks. I like it here though. No neighbors for James to terrorize.


Not that he walks around in the nude anymore. He stopped doing that after I had my friend Luisa over for tea and forgot to tell him. He was embarrassed to say the least. Before she could say much more, James walked into the kitchen a bit red in the face, giving Lily the impression that he had heard the last bit of what his mother had said.

You two stay out of trouble. He doesn't want his parents finding out that he's staying here. Not that anyone that my parent have over here would talk to his family. They moved from the kitchen to a large impressive room with high ceilings and drapes heavier than her father's Cadillac.

There was a grand piano in the far corner and a fireplace surrounded by large couches. James walked across the room, Lily following behind him, taking in the extravagant statue in the corner, the Persian rugs that were bigger than her den, and all the portraits of men and woman on the walls some had James' nose, others had his eyes.

While she was busy having a staring contest with a particularly old looking man, James reached for one of the bookcases near the fireplace and pulled it open, revealing a secret room. Lily bit her tongue and mentally berated herself for being surprised. She tried to keep her face impassive, but she could tell by the smug look on James' face that he could tell she was impressed.

It reminded Lily of the Gryffindor common room actually.

She walked over to the fireplace she looked into the fire and realized that it was the same fireplace that was in the other room, she could see the elegant couches from where she was. James picked up a deck of cards off the mantel and sat down on the rug in front of the fireplace. She liked that he did that, switched from caring friend to playful in a matter of seconds. 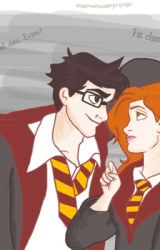 A few hours later, Lily and James were sprawled out on the couch with a bottle of his mother's white wine and a bowl of chocolate covered pretzels. Lily grabbed another handful of pretzels and made a point of stuffing a few in her mouth without answering him. And then she just talked to me like she hadn't seen me in a while.

Spending more time with me only makes you like me more, which makes you enjoy spending time with me more. I have to get back home, before my grandmother has another reason to shout at me. They reached the front room just as both of James' parents and the Minister of Magic were making their way there. Lily had to admit, being in James arm made her feel warm. No, no, no, I can't be thinking this, she thought, it's James Potter, you are not allowed to feel good when his arm is around you. Pretty soon, the whole school would know about it.

Lily pulled herself away from James and ran away, crying. She thought she hated James Potter, but when he kissed her, she liked it but now she hated him, but something made her want to kiss him more. She went to her dorm, she wanted to be alone, she didn't want Alice or Roslyn with her. She didn't want anyone. Just In All Stories: Story Story Writer Forum Community. How did Lily end up with James? How did she grow to love him? It all began with one force date and a very special kiss Lily's cheeks turned pink.

James did the same.

Lily shot him a death-glare. She has the law is my boyfriend. And ron and james potter universe are still in. If you like us to fanfiction.